Sorry, you need to enable JavaScript to visit this website.

Of course, Périgord is a region with green and hilly landscapes which invites you to long walks or bike rides. Of course, the Périgord hosts magnificent castles and charming villages. But the Périgord also hides some of its most beautiful treasures under the ground. Like the Grottes de Villars in the Périgord Vert, a cave with beautifull natural concretions.

The Grottes de Villars is one of those places that offers an escape to the fluctuations of the weather. Whether it is too hot or the sky is dull (which hardly ever happens at Château le Verdoyer!), When you enter the cave, you appreciate its constant temperature, whatever the season. No sooner have we entered the freshness of the caves the magic operates.

It is an underground river which dug this network of galleries, so far, only 13 km of yhese have been explored. Your visit will however allow you to admire only a small part of these caves discovered in 1958. But the approximately 600 meters that your underground walk lasts are more than enough to grasp the beauty of the site. Throughout your journey you can therefore admire stalactites, stalagmites, draperies and other forms of concretions magnified by the light show that turns the Grottes de Villars into a real museum whose scenery have been sculpted by nature.

However, the interest of the Villars cave is not limited to its concretions. The cave also presents prehistoric paintings made some 19,000 years ago by the Cro Magnon man. In addition to its underground journey, the Grotte de Villars also invites you to take a trip back in time. Horses, but also ibex and bison, are represented on the walls of the cave of Villars. As a special curiosity, in the painted scene of the “Bison and the Sorcerer” one of the rare human representation in the parietal art can be seen. We can learn more about the Cro Magnon men and his period, by taking the educational route outside the Villars cave through the garden, a fun space for the whole family. In addition to the statues of prehistoric animals, you will discover the reconstruction of a prehistoric camp with boards of the vegetation of the Périgord Vert in prehistoric times. During the school holidays, activities for children complete the program.

Just a few minutes from the Château le Verdoyer campsite, the Grottes de Villars are definitely one of the most beautiful visits in the Périgord Vert. 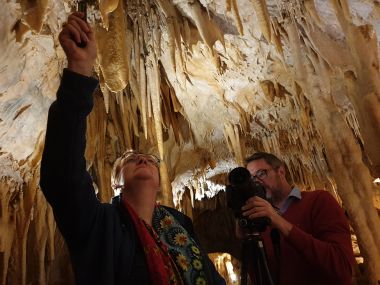 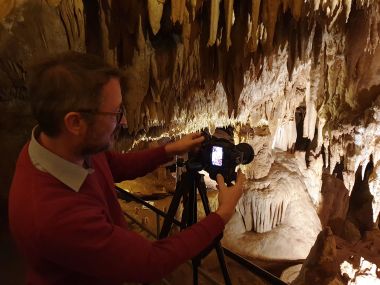